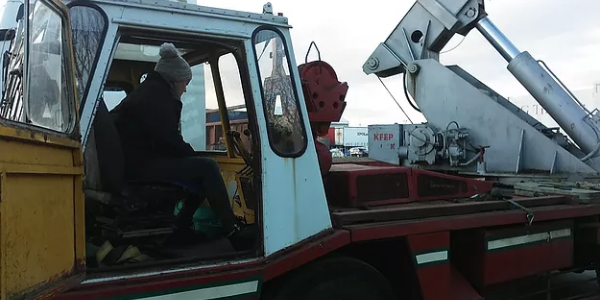 No, it's not a joke or a riddle, it's our latest upgrade at G Transport as we took delivery of our new Portakabin office in early December.

With a growing team we needed to add some extra desk space and the cabin that we've used since moving into the yard just wasn't going to stretch to another.

Portakabin came over from St Albans to have a chat and see what we needed. Austin and our Account Manager, Freya, were great at assessing what we needed. They recommended a Solus unit, 40ft by 10ft, refurbished after a stint at Amazon. This will give us almost twice the amount of space that we had before.

Moving was quite the operation! We moved out of the old cabin on Thursday to a temporary office with Alpha Marketing nearby, Alice hosted us very well during the move!

On Friday, Ian from Bedfordshire Recovery lifted out the old cabin. Helen from the team enjoyed this particularly as she got to operate the crane and lift out one of the cabins herself!

With the old cabins gone, the bank was dug out to accommodate the new, larger cabin. It was a full team effort with Graham - the G in G Transport! - laying the slabs for the new cabin himself.

By Monday the work was completed, in time for the new cabin to arrive and be lifted in. With a quick bit of work from Leighton Aerials, we were up and running again!

So, an office move without the bother of actually going anywhere! The team are settling in to their new space, desks have been claimed, tea has been made. Here's to more G Transport fun in the new cabin.